When Skelton started for the first time this year in week 8 the Cardinals were just 1-6 and were looking like potential first overall pick candidates. But, with Skelton under center the Cardinals went 6-2 over their final 8 games. 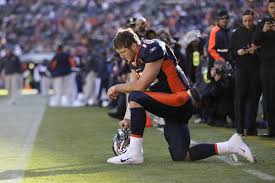 For most of the NFL season it has seemed like a two horse, and then maybe a three horse, but back to a two horse race for the league MVP. Green Bay’s Aaron Rogers, New Orleans’ Drew Brees and New England’s Tom Brady have all put up incredible numbers this year, and it seems that the MVP vote will come down to Rogers and Brees. Either of those 3 players would be fine choices, but recently a new candidate has enter the MVP debate; Tim Tebow. One of the most galvanizing players in recent memory, Tebow stirs up heated debate for a variety of reason. To be honest I don’t care about his off the field but kind of on the field stuff. Whatever makes him happy, right? What I find far more interesting is the question of Tebow should be considered for the award.

There are many statistical reasons why Tebow shouldn’t be in the conversation for the award. There is no need for an advanced statistical analysis of his play, one need to look no further than NFL.COM to see that the numbers don’t exactly weigh in his favour. Tebow is 33rd in yards per game, and his 46.5 completion percentage, also good for 33rd in the league, is a full 24.7 percentage points worse than the most accurate QB Drew Brees. To be fair to Tebow his 2:1 td to int ratio isn’t the worst in league, but his 72.9 QB rating certainly is one of the worst and good enough for 28th best. The more you compare Tebow’s stats to his peers the worse Tebow looks, but the support for Tebow isn’t about merely stats, it is about value.

The crux of the Tebow for MVP argument is that he was more valuable to his team’s success than any other player this year. For Tebow supporters, that argument is completely different than “who is the best player in the league?” It would be next to impossible that Tebow is a better QB than Rogers or Brees, the individual stats simply don’t show that, but because the argument is about value a new set of evidence has to be examined.

When John Fox finally, and reluctantly, named Tebow the starter for the Broncos week 7 game they were 1-4 and it looked as if playoffs were out of the question. Yet at the end of week 17 the Broncos won the west with an 8-8 record and secured their first playoff game since 2005. Tebow had a 7-4 record as a starter this year; good enough for a .636 win percentage. Supporters point to how great he is in the clutch, leading the Broncos to 5 come from behind wins and 3 OT wins. To borrow a phrase from Skip Bayless, he just wins game.

This “he just wins games” type of analysis is flawed. It asserts that “wins” is all about the QB, and not about the team. It disregards the fact that during Tebow’s 7 wins the Denver defence allowed only 17 points per game. Yet the mere fact that the analysis is flawed isn’t the most damning indictment of the Tebow for MVP campaign, instead it’s that the analysis which supposedly proves Tebow’s greatness shows there is a player even more valuable to his team.
Like Tebow this player started his season on the bench, and just like the Broncos his team’s record was awful. Yet because this QB “just wins” the team went on a tear winning most of their remaining games and ending up with an 8-8 record. In case you are wondering the QB is the Arizona Cardinal’s John Skelton. When Skelton started for the first time this year in week 8 the Cardinals were just 1-6 and were looking like potential first overall pick candidates. But, with Skelton under center the Cardinals went 6-2 over their final 8 games. That is a .75 win percentage, 12 percent better than Tebow’s. Skelton also won games in dramatic and clutch fashion, with 3 of his wins coming in overtime. Obviously the Broncos are in the playoffs and the Cardinals aren’t, but they ended up with the same record, and Skelton was able to do something Tebow couldn’t; beat a playoff bound team (Tebow was 0-2, while Skelton was 1-2).

Do I believe John Skelton should be MVP? Absolutely not, but what this hopefully showed is Tebow shouldn’t be the MVP either. When you analyze the evidence, whether it be the objective comparison of QB rating and Yards/Game or the more subjective analysis which confuses team and individual success and proves only correlation, not causation, it should be clear that Tebow, although he may be the most interesting player of the year, is not the most valuable.

Written for CAVE by Cory Crabtree

It’s a league where being ‘clutch’ pays off, week 6 in the NFL only pushed this idea further. The Manning brothers seem to be…